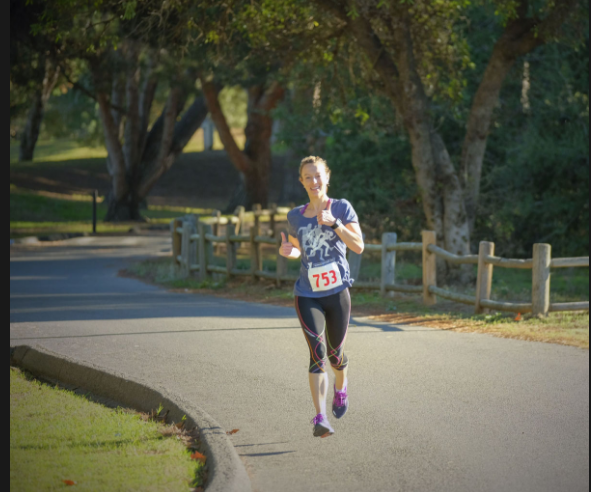 The event kicked off a new fitness series focused on encouraging and raising awareness to fight inactivity in youth, said race director Brenee English, adding that it's hoped the run will repeat every three months.

"Today is all about getting kids and their families moving, whether it's part of a New Year's resolution to stay in shape or to just move around a little more," she said. "We've been planning this series since last spring, and we want to create more community development around the topic of health and wellness."

"We're also doing this partnership with the YMCA today, who will get 40 percent of the proceeds from race registrants," English said. "We hope that in the future we'll have even double the amount of participants sign up because it really is just a fun community event for people to get involved."

Jenna Kovalak, first-place winner of the 10K race, completed the route with a time of 40 minutes and 50 seconds. She was in charge of the Y's running boot camp program and brought her fellow members.

Kovalak is no stranger to running. She said she and her husband set a New Year's goal to participate in the upcoming Reebok Ragnar So Cal race -- a 12-person relay that spans about 200 miles, starting in Huntington Beach.

"2018 is definitely going to be all about new year, new me, new races, so I can't wait for the Ragnar," Kovalak said. "I try to do five to six races a year, and it's nice to get today's 10K to start off my new list of goals.

"I think it's a really great idea to encourage more local races like this in the Santa Maria Valley, because that is one of the things missing here," she added. "I hope after today we'll bring more runners."

Angela Cena, mother of Grant Cena, a freshman at St. Joseph High School, said her son was running the race with his fellow cross country teammate, Alexis Medina, to stay in shape in between seasons.

Alexis' father, Guillermo Medina, assistant coach of the school's cross country team, encouraged all the runners to find fun, 5K races in the community to stay in shape and continue conditioning for the next season.

"Today's their fun, off-season run, so there's really no pressure at all to perform in a specific way," he said. "The only pressure they have today is to have fun!"

He continued: "Last year, when the kids started their season, most were really out of shape, so this year, I want to start a little bit ahead and gear up for the next season, but also ensure that they won't be burned out."

Guillermo said he was thinking of returning to the next event, which will be held in April, and the third later this summer.

"Alexis, this morning, wasn't too excited to get up this early, because she's been tired training for soccer," he added. "She had a great game yesterday and at halftime, she came up to me (and said), 'Dad, do I really have to do the race tomorrow?,' but then later changed her mind."

Angela Cena said Grant was only too excited to do a no-pressure race.

"He went to the school's basketball game last night, and I asked him afterward if he's still down to do the run today, and he said, 'Mom, of course! Sign me up!'" she said. "He's so excited to be here, he just wishes more of his friends will sign up next time because races are really so much more fun when you're all in a big group doing this together."

Angela added, "I want Grant to keep participating in local races here because there are organizers who go out of their way to come together for the community, especially for the youth so they need a good turnout for events like this."